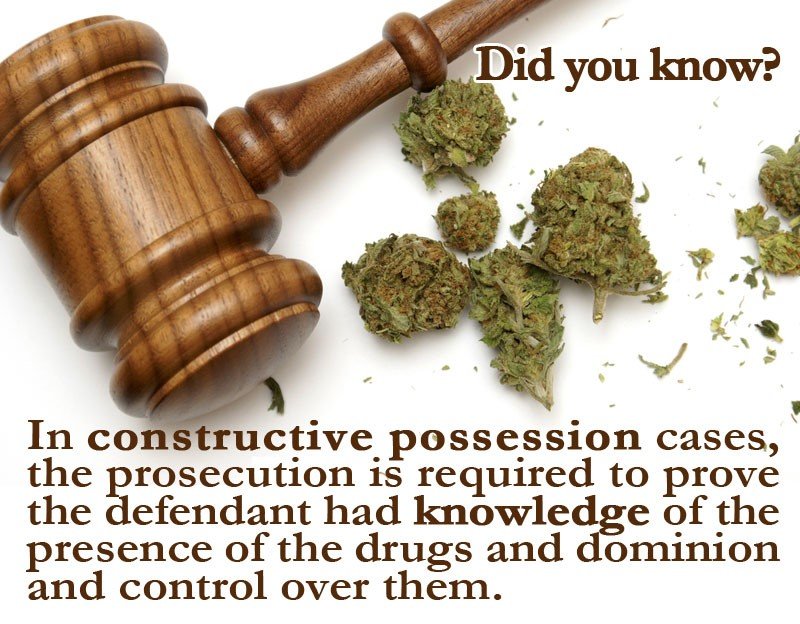 Constructive Possession: Even Without Actual Possession…You Could Be in Trouble!

The old adage “possession is nine tenths of the law” means someone in actual possession of drugs is presumed to be in possession.  By contrast that should mean that those not in actual possession of drugs, i.e., the remaining “one-tenth” are not in “possession,” right?  Wrong! When it comes to criminal law, the “one-tenth” defense will not serve a defendant well since the prosecution can sometimes prove the case by proving that the person “constructively possessed” the drugs!

The case law confirms that even the one-tenth defendant, can be convicted.  But that doesn’t have to be the case.  With proper skill, guidance and experience, a criminal defense attorney can assist a defendant facing these type charges.  Here are two hypothetical situations that make the point.

Q: John went to a party at a hotel room his friend had rented. Police arrived to the hotel room in response to a loud noise complaint.  The police found, in plain view, several “baggies” containing marijuana in the bathroom sink in the hotel room. There were 10 other people in the room at the time police arrived. John told the police he did not know there were drugs in the room, and that he was just drinking a wine cooler. John made no other statements. Every one arrested also denied knowledge of the marijuana and possession of it.  Can John be convicted of constructively possessing the drugs simply because he was present when the drugs were recovered?

A:  In this scenario it appears that it is reasonable to conclude that John did not have knowledge of the presence of the marijuana that was found.  Additionally, as will be discussed further in the next hypothetical, it appears that John did not exercise “exclusive control” of the premises where the drugs were found since he did not rent the hotel room and was only a visitor.

There is also the case of Giza v State, where marijuana was located in a suitcase in the trunk of a car that was driven by the defendant but also occupied by another passenger. 71 So.3d 214 (Fla. 2d DCA 2011). The Court on appeal reversed the driver’s conviction based on the State’s theory of constructive possession, reasoning that because the passenger also had access to the car keys and the trunk, the State could not prove the driver exercised dominion and control over the marijuana—a material element of the offense. Id.

Q: The police recovered 4 small bags of cocaine from Mary’s apartment kitchen floor.  Mary was not home when the cocaine was recovered but Jill, Sarah and Stacy were present.  Jill, Sarah, and Stacy were arrested on the scene.  As Mary was going to the bank the next day to get money to bail out her roommates, she was arrested by the police who alleged she was in constructive possession of the same cocaine that was recovered the previous day from her apartment. Mary asked to speak to a lawyer and gave no statements to the police. Mary had never been arrested before and wanted to attend medical school. She is now convinced that she will never get into medical school because all the prosecution has to do is prove that since she lived in the apartment where the cocaine was found, it can be inferred that she was in constructive possession of the cocaine.    Is Mary right?

A:  No.  In this scenario, it appears from the facts that Mary did not exercise exclusive possession of the apartment, as she shared it with three other roommates. The knowledge and control elements cannot be inferred and the prosecution will have to prove those elements beyond a reasonable doubt with independent proof, i.e., a confession from Mary (which she didn’t give), witness testimony or scientific evidence that links Mary to the cocaine.  If they cannot link Mary to the cocaine, the State cannot prove the possession charge beyond a reasonable doubt even under a constructive possession theory. When a defendant has been in exclusive possession of the premises where contraband is found, knowledge and control can be inferred. Spataro v. State, 179 So.2d 873, 877 (Fla. 2d DCA 1965). However, when the premises have not been in the exclusive possession of the defendant, as is the case here, knowledge and control cannot be inferred unless there are incriminating statements or other circumstances that would support such an inference. Id. See also Santiago v. State, 991 So.2d 439, 442 (Fla. 2d DCA 2008) (“Generally, independent proof can be established by the admission into evidence of a pretrial statement made by an accused, by witness testimony, or by scientific evidence.”).